2018 was a dramatic year for the crypto industry and cryptocurrency news sites have documented all the greatest triumphs, tribulations, trends and controversies. Let’s take a look at how the coverage has changed in 2018.

Using the CryptoCompare API we collected metadata (title, category topics, date, time and publication) on 64,605 articles from 25 news sites over the course of 2018. The data gave a good overview of what news sites believe to be the most important and popular topics in crypto. The charts also show how these market narratives have changed rapidly from month to month.

As ever, the volatile cryptocurrency markets were a topic of great interest to readers and garnered a large share of news coverage. Despite falling prices, the number of articles about crypto trading and market commentary actually increased as the year progressed, perhaps suggesting that these articles cater to an audience more interested in volatility than price. Whether this trend will continue into 2019 will be interesting, particularly if  –  as many believe  –  the bear market has some time to go.

One far less surprising finding was that the volume of both sponsored posts and ICO commentaries declined as 2018 unfolded. Perhaps the most important crypto narrative of the year was the bursting of the enormous ICO bubble as most projects failed to produce anything of real value and saw their token prices collapse. This trend is likely to continue apace in 2019. Whether “STO” (Security Token Offering) commentaries and sponsored posts will take their place remains to be seen.

After the enormous expansion of the altcoin market in 2017 and 2018, many of these new, smaller cryptoassets disappeared as quickly as they sprung up. As always Bitcoin kept chugging along, gaining a larger share of the news coverage from the growing number of ‘bear market casualties’. Bitcoin-related articles reached a peak of 42% by the end of the year. Blockchain articles too maintained their prominence  –  peaking at nearly 20% of articles in May.

Not “In it for the Technology”

Another interesting statistic is the decline in the proportion of articles focusing on crypto and blockchain technology. While much of crypto history has been the province of tech enthusiasts, 2018 heralded both increasing mainstream entry into the space as well as the influx of institutional finance. As news sites ultimately respond to what gets most views, both these factors likely contributed to the slump. 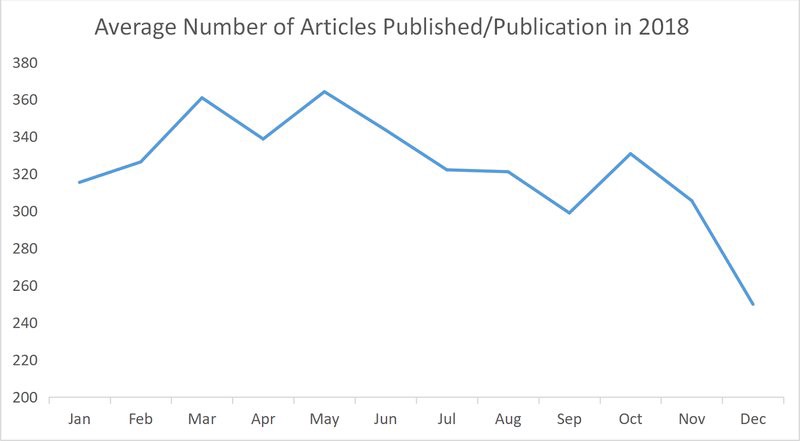 While 2018 has seen a glut of new, smaller crypto media outlets, the larger players have been far from unresponsive to the bear market and the general slump in interest in the space. This was clearly reflected in the average number of articles published per publication  –  decreasing from over 360 at its peak in May to around 250 in December. Interestingly the peak output per publication in May came a month after the massive  –  albeit short-lived  –  rally in April. The MVIS CryptoCompare Digital Assets 10 Index recorded an almost 100% gain during this relief rally. 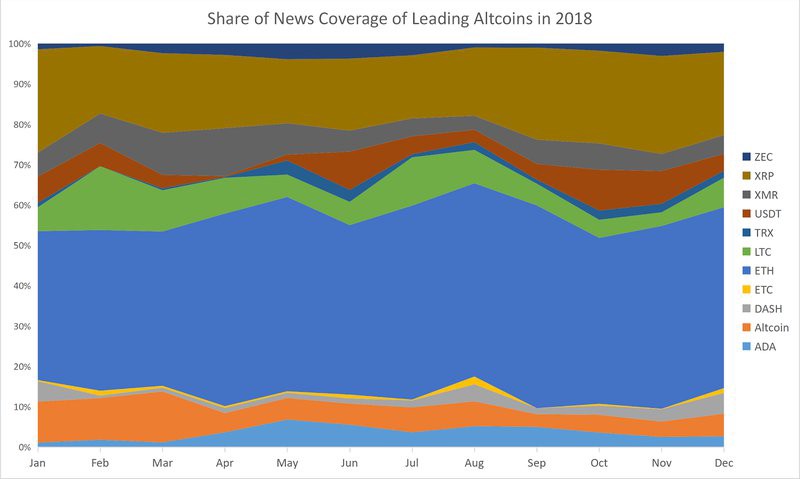 In general, the news coverage spread on altcoins isn’t too shocking  – and you can probably guess that the proportion of news stories about these altcoins corresponded pretty neatly to their respective market caps.

A couple of standout altcoins were Litecoin (LTC) and Tether (USDT). Both saw news coverage in 2018 larger than what their market cap would have suggested.

In the case of Tether, this extra attention turned out to be one of the most prominent crypto narratives of the year, with speculation about the stablecoin’s dollar backing, ‘proofs’ from Tether Limited of the reserves, and swings in the price of USDT all generating a sizable chunk of the headlines. Tether coverage hit a peak in October  –  accounting for over 10% of news articles  –  after the Bitcoin-USDT premium hit an all-time high early in the month.

Interestingly, despite having similar market caps  – Ethereum and XRP/Ripple saw quite different shares of the coverage, with Ethereum significantly eclipsing XRP/Ripple throughout the year.

This article was first seen on the Daily Hodl and can be found here: https://dailyhodl.com/2019/01/20/64605-crypto-news-stories-from-25-news-sites-reveal-market-narratives/

This site runs on your generous donations. Any amount is appreciated to our Bitcoin address:38vVN46V1E5gk1RauHggJHgRZB8Ad1qcNF